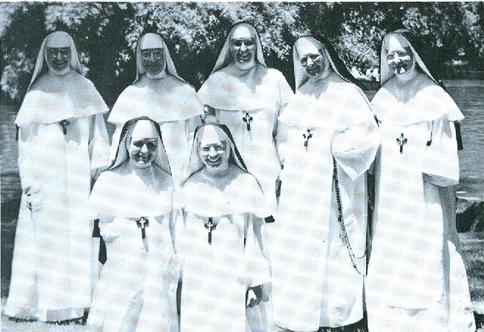 When Father Philip Scher became pastor of St. Brigid's in 1911, he wanted a hospital and a Catholic parochial school established near the church.

The hospital was established in 1913 and staffed by the Dominican Sisters of Kenosha. But they didn’t have enough sisters to also run a school. That was to come later. In 1917, three teaching sisters were available to start a Catholic parochial school.

A hall located behind the church and owned by the Holy Name Society provided the first classrooms. It was an unpainted wood building with rafters on the inside. Folding partitions were put up to divide the space into three classrooms and seventy-five children were enrolled. Besides the windows, a trapdoor in the ceiling could be opened for ventilation.

School children put their horses in a shed and buggies were lined along the fence. At lunchtime the boys fed the horses before eating their own lunches. The school was named St. Rose School because Mother Augustine, one of the nuns in Kenosha who was key to the founding, had made a promise to God that if a school was built, she would see that it was dedicated to St. Rose of Lima, the first American Dominican saint.

By 1919, two more sisters joined the teaching staff, and one of the porches had to be enclosed to make an extra classroom. A small room attached to the parish garage was used for Kindergarten.

In 1921, Fr. Peter H. McNellis improved the school by covering the walls and ceiling with boards to hide the rafters. He and parishioners painted the outside of the building gray and constructed a building to the north of the hall with two more classrooms and a kitchen. Enrollment doubled in 1921. In the following years, the old wood stoves were replaced by gas heaters. The Sisters warmed the classrooms before the children arrived by walking to the school at 5:30 a.m. to light the heaters in each classroom.

In 1941, a parishioner, Thomas McCarthy, left $60,000 to the parish in his will for the construction of a new parochial school. In today’s dollars, that’s over a million dollars! Soon a new building was under construction with six classrooms and offices. The new school was renamed Thomas McCarthy School in his honor.

Soon enrollment skyrocketed to 450! Sisters sometimes found themselves with 50+ children in a classroom. One sister prayed a novena for her classroom to be reduced in size so that she could get at her chalkboard. After the novena, several children’s parents got field work in other areas. "I removed one table and I could get at my chalk board. I was overjoyed," she said.

St. Rose-McCarthy will always be grateful to those who founded our school, especially the Dominican Sisters of Kenosha. And to all the faithful volunteers and donors who served and continue to serve with their generosity.