Jeanne’s father worked for JC Penney and they moved around a lot.  She went to high school at Fresno High and then to Fresno State to earn a teaching credential.  Afterwards, she went to work in Cupertino and thought she would spend her life in the Bay Area.

Bill was born in Oakland, but came to the valley early in his life when his mom landed a teaching job in Lemoore.  Bill went to Lemoore High School, College of the Sequoias, and Fresno State. Bill’s dad ran a grocery store in Stratford. “I remember running groceries to the sisters of MIQ, once it was built in Lemoore,” said Bill

Bill told a college friend that he wanted to meet a “nice Catholic girl,” so his friend introduced him to Jeanne.

On their third date, Bill proposed. Jeanne laughed as she recalled, “I guess he didn’t need to look any further; he had no other qualifications — just a nice Catholic girl.”  But Jeanne took a little time before giving him an answer.

They settled in Hanford. Bill began his 37-year career with Kings County working as a social worker. He was eventually to become the Director of Human Services which included family welfare, adoption, child protective services, and more.

Salute to Bill and Jeanne Gundacker 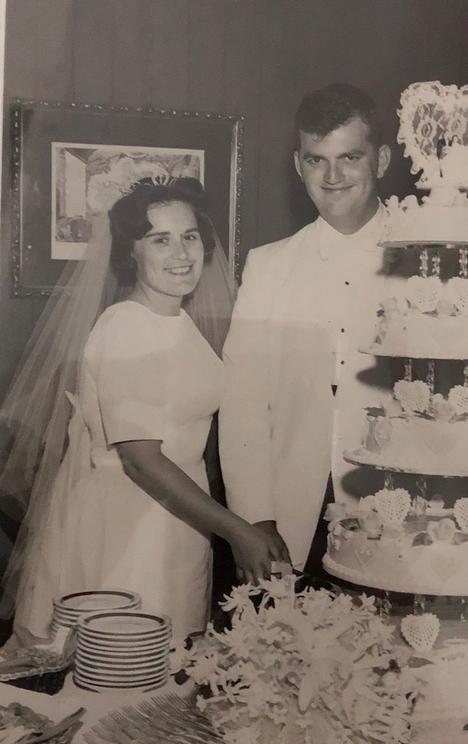 Jeanne visits the primary grades about every other week to read aloud to them. It’s a treat to the students and they very much look forward to Mrs. Gundacker’s storytimes.

Another time, Bill brought in a letter from a parish in southern California. It was an appeal letter to parishioners requesting tuition sponsorships. “We adopted that idea and have had an incredibly successful sponsorship appeal for the past three years,” said Perkins. “Those sponsorships have been invaluable. We have students attending who otherwise wouldn’t have been able to attend. The annual sponsorship program has become an essential component of our operation.”

Bill and Jeanne have also participated by sponsoring a student. They both love the letters and pictures they have received from their student. Jeanne loves seeing her sponsored student when she reads in the classroom.

Bill continues to be on the lookout for items to help the school and Jeanne is a real “prayer warrior” for the school.

Thank you, Bill and Jeanne, for all you do for St. Rose-McCarthy!

Jeanne worked as a teacher until their two children, Wendy and Mark, came along. Then she stayed home for a few years. “Even then, I often substituted; I always kept my hand in education,” she said.

When their youngest entered 2nd grade, Jeanne went back to work full time for the Hanford Elementary School District. She became proficient in the Slingerland Approach, a multi-sensory method to help students struggling with reading. She loved helping students and that’s where she met Jamie Perkins, who worked as an administrator for the school district at that time.

Perkins remembers that Jeanne was “masterful” and she learned so much about teaching from her.

As St. Brigid parishioners, Bill and Jeanne have always supported St. Rose-McCarthy — including a stint on the board during Fr. Dan Avila’s time. With the arrival of Mrs. Perkins as principal, their involvement deepened.

“I remember they just appeared in my office and said ‘How can we help you; what can we do?’” Perkins said.

Since then they have been faithful supporters and helpers. Perkins said, “When I see that Bill is calling me, I always know it’s something good. One time he phoned that he was at Tractor Supply and had found some picnic tables and benches for the Kindergarteners. “All I needed to do was send someone to pick them up.”