Mark learned music on the trumpet and bass guitar, often playing in rock bands. During college, while studying music, he began working as a choir director for a church. During this time, he began learning to play the piano.

His “real” introduction and immersion into Catholic liturgy began when he was asked to lead music for RCIA Training Workshops. He traveled the country often rooming with older guys, who were really nice, and who turned out to be bishops! “I didn’t know they were bishops all week; they seemed like regular guys who knew a lot,” he said.

During this period, Mark realized the power of the Mass to teach the faith. Participation was huge. Thus he became passionate about helping children participate at Mass through singing.

Mark has a deep background as a liturgist in the San Francisco and Oakland dioceses. Besides leading music at parish masses, he has directed liturgies for ordinations, Rites of Election, and Chrism Masses. He has also taught classroom music, choir, band, and orchestra at Catholic schools.

Mark loves working with children. He says, “I enjoy kids and the life and energy they bring to everything they do. By being in the choir, kids understand they have a role in the Mass and they belong there. This will make them church-goers for life. I want them to know for positive they belong there and they have gifts to share. Then wherever they go,  they will seek out the church.”

Besides teaching in the SRM classrooms, Mark directs the school choir, which he calls a “hardworking” choir. It’s for Third Grade and up. They meet on Thursdays after lunch to practice. Mark emphasizes responsibility and working together as an ensemble. They sing at the Friday school Masses and once-a-month at Sunday Masses. “It’s a joy to see a student’s voice blossom in a fun and safe manner for their voices,” says Mark.

Mark notes that for junior high boys whose voices are changing it’s important to work with them separately from the girls. “They aren’t used to their voices and they need to learn how their voices work,” he says. “When that’s achieved, they sound great.”

Mark concludes, “Children’s voices are so nimble and agile, the skies the limit.”

“The skies the limit.” Mark Sullivan

Mark Sullivan began his career teaching children by helping his mother raise his 9 younger brothers and sisters — there were 11 children in all with Mark being the oldest boy. Mark remembers he was really good with “crowd control” — that certainly comes in handy when managing children’s choirs. 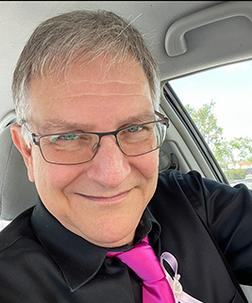